As the first autumn mists roll in, and the first frosts glisten on the lawn, it’s that time of year again; pike season! Already, I’ve seen posts on social media from anglers keen to try pike fishing for the first time, with many asking for some advice on how to fish for these fine creatures, but I’ve also witnessed some anglers already on the bank, striving to catch their first snapper, sadly, woefully unprepared to deal with the event when it does finally happen, so here’s a few ideas to get you fishing for pike safely… Organisation is paramount when fishing for pike for the first time. It’s not a good idea to just turn up with a lure rod, fling a few plastics about, finally get a take, find that a double figure pike has engulfed the lure, then remember that you haven’t got the tools to deal with it, so check out my list of ‘must have’ kit to safely enjoy some predator fishing.

Obviously, first on the list must be a tourniquet, chain mail armour, followed by blood clotting agents, a suture kit and various field dressings to prevent the inexperienced angler from bleeding to death on the bank if bitten by these freshwater sharks right? Not really, pike do not bite, so the only injury you are likely to incur comes from inattention, so it pays to be prepared! Pike are a fearsome looking fish, but in reality, these highly evolved creatures are actually a delicate animal which can come to real harm if not dealt with gently and confidently. Every year I hear of anglers trying pike fishing for the first time only to never return because they haven’t properly prepared or researched the kit they’ll need to fish safely resulting in bloodshed or cut traces…don’t be one of those anglers!

You can use carp rods and reels for your new venture into pike angling, but my scribbles here concern some items of specialised equipment that you really should purchase before your first foray. Most anglers already own an unhooking mat, but consider an upgrade to a mat that has sufficient length to fully accommodate a fish which may be over a metre in length, or better still, a walled type cradle to prevent the fish sliding onto the bank. Personally, I use an XL cradle with an additional mat within just for a bit of extra protection against sharp rocks on some of the reservoirs I fish. It can prove somewhat expensive, but I promise you won’t regret it; good anglers protect their fish…

Again, many anglers also own a pair of forceps, but an investment in a couple of pairs of heavy-duty longer forceps is a good idea. Buy quality, as cheaper versions will often twist when clamped onto the hooks which means that you just cannot generate the pressure needed to release a deeply embedded treble. It’s not just forceps you need though, a set of sidecutters is another essential tool that novice pike anglers often think they can get away with. A strong pair of sidecutters will allow you to quickly cut through any treble which is snagged in your net, or one which has passed through part of the fish’s mouth; why drag the barb back through when you can just snip it off? Heaven forbid you get a treble in the finger, again the sidecutters will make short work of it, (the treble, not your finger!) so should form an integral part of your unhooking kit. I also use a pair of long nose pliers, nothing fancy, just a run of the mill pair purchased from a high street retailer just as back up if required for a bit of extra ‘grunt’. So, to summarise, your tool set should comprise AT LEAST one pair of long forceps, some sidecutters and long nose pliers; with that in your bag, you should be able to safely release any fish you catch. Your tools are perhaps the single most important part of any successful pike anglers kit, so spend the money on the right items!

You now have a basic but useful list of items which will keep your catch safe on the bank and enable you to unhook it without too much trouble, but there are other things you can do to make your pike fishing more enjoyable, after all, no-one wants a deeply hooked fish to deal with so you need to consider bite indication. Despite their reputation, pike can be deceptively gentle when they actually pick up a deadbait so your indication needs to be spot on to prevent the predator swallowing the bait before you even know it’s there. Braid helps immensely if you can afford to spool your reels with it, not only does it have no stretch, giving much more direct bite indication, but used in breaking strains of up to 60lbs, it will allow you to retrieve a snagged trace simply by pulling hard enough to bend the trebles and free the rig; a lost baited rig is to be avoided at all costs! Drop off bite indicators are invaluable too, much better than the usual configuration of bite alarm/bobbin used by carp anglers, and when used with an open bail arm, will allow the fish to pick up the bait without feeling resistance. On that point, it’s worth noting that the days of ‘count to ten and strike’ are long gone; as soon as you get any indication that a pike is present, watch the braid/line to ensure its peeling off the spool as the fish moves, pinch it if necessary to try and feel the fish, but quickly close the bail arm, wind down and set the hooks. If you miss the run, so be it, it’s much better than having to deal with a pike which has swallowed the bait…for both of you! Even if I’m float fishing, I’ll still use drop off indicators and alarms for that second or two when I’m pouring a brew or stirring my beans, I don’t want to miss any indications!

Having briefly mentioned tools and bite indication, it’s fair to mention nets. Of course you can land pike in your expensive 42” carp net, but when the fish rolls and the point of a treble catches in the mesh and wraps it around the pike, you have limited options which include cutting the actual net so you can see the fish again. A much better option is to purchase a proper predator net, with a wider, rubberised mesh which makes it much easier to remove treble hooks which are caught in the mesh. It’s probably a good idea to mention that when landing any pike, let the fish get into the net properly in the water, squarely in the base of the mesh so that when you lift it, the pike isn’t left hanging down the side of the net from a treble which has caught in the mesh.

A couple of other things you could do to make things easier include incorporating a trace clip into your rig so that the trace can be unclipped immediately that the pike is in the net so you can get your rod and reel right out of the way whilst you deal with your capture. The use of red trace sleeves or trebles rather than black ones also helps you locate the hook position should the trebles not be in the edge of the jaw; the mouth of a big pike has a lot of places for the hook to hide, so seeing it quickly is important and a last tip, use semi-barbed trebles to make removal even easier; after all, every little helps…

I’ve tried to cover a few of the basic requirements you should consider before any pike session, but a word about accidents is worth noting. You will get caught out occasionally, every pike angler has tales of bloodied knuckles or ‘gill rash’ and when dealing with sharp teeth, spinning trebles or razor like gill rakers you will lose a bit of skin sometimes, it’s unavoidable, so keeping any injury clean with a roll of plaster tape and some antibacterial cream is a good idea. Many anglers opt for a glove when handling pike, I prefer not too as I don’t lose any sensation of exactly where my fingers are in the pike’s mouth, I can properly feel the point of the jaw to hold them safely and I don’t want my glove to snag on any teeth, but it is a matter of personal choice. Remember, it’s not just the fishing that puts you at risk either, winter time on the bank can be hazardous with wet slippery banks and freezing water also to be considered so let someone know where you are; an unexpected entry into bitterly cold water is often sadly fatal…

To finish, there are many good videos online which will show you how to deal with a pike when hooked, but there is no substitute for actually doing it and the best way is to go with an experienced piker to demonstrate and guide you. Most conscientious pike anglers are happy to show you how they deal with a capture, so don’t be afraid to ask; a few minutes guidance can do an awful lot to boost your knowledge… Confidence is key to unhooking pike, a firm grip and proper tools make the job much easier, but I still see anglers struggle due to a lack of resolve or preparation! The Pike Anglers Club of Great Britain lists some useful guidelines of their website as does this one (www.baitbox.com) so do your research, then get out there and enjoy yourself! 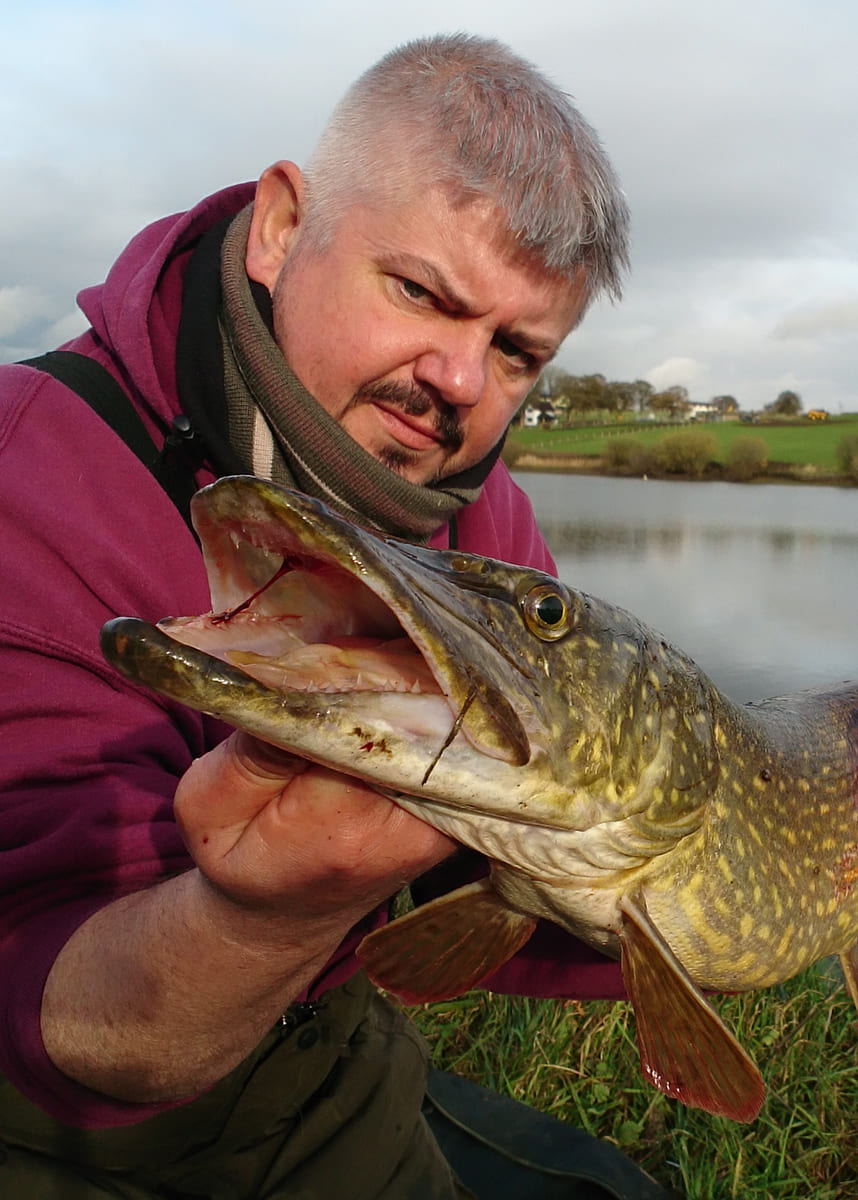