So far, my pike season has been mediocre at best, with perhaps fifty fish caught, and nothing over 20lbs this year, so a final flurry was on the cards this week. I opted for a club venue which required a half hour drive, loaded the van the night before, made sure the freshest Baitbox freezer baits were selected, and after waking, jumped in the van to set off to the lake. On the way, I remembered a different club water much closer to home, and if I’m honest, I didn’t really know what was in it but decided to give it a go. I knew it contained pike as I’d had a walk around with the lure rod and caught plenty of fish to around 10lbs, but I hadn’t heard of anything bigger…

I parked up just five minutes after setting out, the sun peeping over the horizon gave indications of a pleasant day (at last!) and the barrow was quickly rolled down the ramp ready to go. My first job was to unload it all, then push it all over the fence before hoisting the barrow over and reloading it, before being dragged down the steep hill to the water’s edge; I certainly wasn’t looking forward to pushing it all back up! The pool had been recently flooded, so not all pegs were fishable and as a result, I selected a fairly mud free peg which gave me access to plenty of water. In summer, the pool is flecked by lilies, I’d noted their positions thinking they may provide ambush cover for pike in winter, so I deliberately set up within casting range.

The usual two rod set up was quickly deployed, a couple of ounces of lead anchoring each deadbait and I sat back to enjoy my first brew in the morning sunshine. I don’t know about you, but I’ve been yearning to feel the sun on my back for what seems like weeks, and it was blissful to actually feel some warmth for a change. I sat peacefully watching a resident kingfisher flit by my rods and enjoyed buzzards as they soared aloft but was brought back to the world by a couple of bleeps on the alarm. I watched the rod tip nod twice, so released the line from the clip and pinched it between my fingers to see if I could feel anything. A minute passed, but nothing developed, so the smelt was wound in, injected with Baitbox herring oil, and flung back out towards the pads. My other rod was also recast, the roach replaced with half a sardine and both were tightened up.

After an hour or so, a fellow angler appeared, and we enjoyed a short discussion about the possibility of larger pike. He reckoned a 20lb fish was potentially catchable but I wasn’t convinced; I’d seen nothing from any social media posts to indicate it, and was resigned to a day catching jacks, but it gave me something to ponder as he moved off to try for carp. As the morning progressed, I moved and changed my baits every hour, leap-frogging them across the swim to cover the maximum amount of water and explore every likely spot, but had no further interest.

Fresh baits were rigged, punched back out and I sat with yet another mug of tea whilst listening to beautiful birdsong and enjoying the glorious sunshine. I heard one particularly shrill, repetitive song, then realised that it was actually my alarm emitting a series of short staccato bleeps as the rod tip twitched! I hit the run immediately and was delighted to feel firm pressure at the other end which turned into a full scale scrap as a hefty predator made efforts to escape! As I’ve mentioned, I hadn’t expected anything much bigger than a low double, but when this one surfaced, it looked much better than anything I’d seen reported, so I was careful to tire it properly to prevent any last second lunges at the net!

A few minutes later, and a very fat pike lay on the mat! She was covered with leeches but otherwise in perfect health, the trebles were quickly removed from the roof of her maw, and I slipped the fish into the weigh sling. I’d already zeroed the scales with the wet sling, and having been recently serviced by Reuben Heaton, I knew I’d get an accurate reading, so was very pleased when the dial spun around to 19lb 8oz! Not quite the 20lb fish we’d talked about, but it was a cracking result on a beautiful day, and after a few quick snaps, she was slipped back into the depths to fight another day. After I’d cleaned the mat, both rods were recast, and as I set the bobbins, I disturbed a pike laying in the margins which tore off leaving a swirl in its wake. The roach deadbait was quickly retrieved and I gently laid it in the margins and sat well back to watch the line, hoping for a second fish.

I watched the rod tip for another hour before the line twitched but was delighted to watch the indicator fall and line spool off the reel as a second run developed. This time it was a much smaller fish of perhaps 5-6lbs, but again in excellent condition and fighting fit. The semi-barbed trebles fell out in the net, and this one was photographed on the mat purely for future reference before it too was returned. Two runs had seen two smashing pike on the bank, but it was time to pack up and go home. After a day in the sun, I was in a much better mood, and was absolutely over the moon with the first fish which had shown the true potential of an underrated water… I wonder if there are any bigger… I might have to have another go, but I’ll have to do some work in the gym before I try pushing the barrow back up that hill again, it was horrendous! 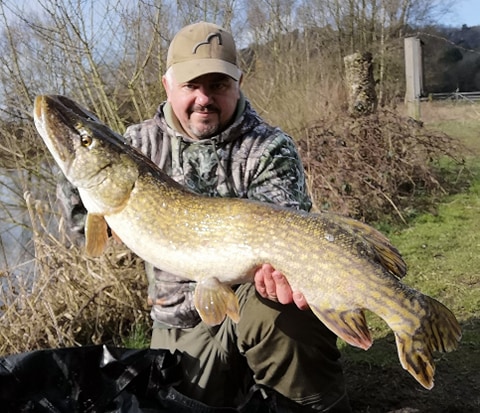