I’ve been back out after pike this week, selecting a tricky, gin clear former sand quarry to target, knowing full well that a blank was to be expected. It’s a tough water, not just due to an area of over forty acres, but also as a result of depths to over fifty feet, giving fish plenty of water to hide in! The lake bed could be compared to an egg box too, with loads of variations, plenty of weed, and just to add to the fun, some inquisitive bird life which have a habit of swimming through carefully laid lines… It’s not recognised as a runs water, a couple of chances per day is considered a good result, so when I arrived in the early dawn light, I was delighted to find I was the only angler there and had the pick of the pegs!

As usual, I’d been keeping an eye on social media to see what and where other anglers had been fishing, but with only a single fish reported since the beginning of the year, perhaps it wasn’t as useful as normal. Having said that, I thought that pike may be lying in deeper water, so headed off for the far side of the lake where I knew I’d have around twenty feet of water in front of me. I reached the desired spot, a peg I’d never fished before, and settled in, setting up two rods, one with a popped up roach, the other with a sardine which would lay on the bottom. I pop up my baits using PikePro poly balls rather than inserts, mainly because I can firmly anchor them and don’t risk losing a balsa insert in the event that the bait is snatched. It’s down to personal preference, nothing more, but it helps my confidence if I know that there is absolutely nothing left to chance which may harm the fish. 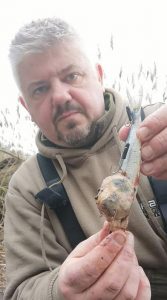 Both were cast out, the popped up bait landing with a dull thud on a clear spot, the other drifting down into weed. I quickly realised I had the baits the wrong way around but left them to prevent further disturbance; the first hour of any pike session offers a real chance of a bite, so I didn’t want to risk it! I sat back to watch the water with a brew, and within a few minutes, the alarm caught my attention with a couple of short bleeps. I watched the bobbin lift and twitch, noted the rod tip nodding, but before I got to the rod, the fish dropped the bait. Winding in, I spotted teeth marks on my sardine, but the trace was dripping with weed, so I deduced that the wire had pulled into the greenery, caused resistance, and the pike had let go. Lesson learned.

I’d watched the film ‘Jaws’ (again!) earlier in the week, and it got me thinking about ‘chum’, the tactic used to draw predators from afar. I wasn’t going to sit and ladle fish guts into the swim, but after a little bit of trial and error, I realised that using pva is a viable alternative. Once my baits have been defrosted, if not used, I replace them in the freezer in a separate draw, so I know which is which. These are then used as chopped fish when dropping rigs close in to attract pike, rather than hook baits. I had some leftover sardines, so cut them up into a bait box, added a good slug of Salmon Oil and mashed it into a gooey paste. I knew the oil would help in two ways; firstly, it’s an attractant, secondly it would prevent the pva melting before the bait hit the water. Once I’d spooned some of the mix into pva mesh, it was nicked onto a treble, a bait flag pushed on to stop it coming off, and it was put back out on the spot. PVA is a technique that offers a few possibilities when predator fishing. A solid bag can be used for much the same purpose, filled with smashed fish, or even with just oil in; when it melts, the oil oozes around the hookbait to create a proper hotspot. PVA string or tape can be used to thread through fish pieces, which are then passed through the deadbait and anchored with a small piece of reed or twig. When it melts, the pieces are deposited directly around the bait, and the stop just becomes bottom debris… cheaper than boilie stops and more effective!

My sardine, with added pva package, was lobbed out with an underarm cast alongside the reeds to my right, nestling into around six feet of water. As I set the rod back on the alarm, I glimpsed a shadow in the reeds which quickly resolved into a shoal of small perch; if there were prey fish, then surely there would be predators? I hoped so… I check my baits every hour or so when deadbaiting, I’d rather waste an hour than a day if baits are lost in weed, so I retrieved the popped up bait and noted a few small puncture marks which was disappointing as I’d had no indication at the rod. The bait was changed, and the rig recast. I drank tea, talked to passers-by, then as darkness started to descend, I decided that after eight hours, enough was enough, and that it was time to pack up. My cradle was the first thing away as I use two unhooking mats when piking. I have a zip up mat which I rest inside my soft wall mega mat so that the fish can’t slide around, so as a last resort, I use that whilst packing away the main cradle.

The alarm beeped a warning. I turned to see the bobbin twitch up towards the rod and watched the rod tip nod towards the slick surface of the water. The bobbin fell away, and line slowly spooled off the reel. I never leave a pike to run with a run with the bait, so I struck hard, and was pleased to hit solid resistance as the pike scarpered into deeper water, the clutch controlling the rate of descent perfectly. Behind, me, a gentleman strolling with a pushchair stopped to watch as my rod hooped over and the pike fought on. “Is it a big ‘un?” I hadn’t seen it so didn’t really know, but he left the pushchair with sleeping baby to come for a closer look as the pike broke the surface; “effing hell! I didn’t know they were that big in here!” I was quietly very pleased with what I’d seen, estimating the fish at around 20lb, and when netted, the onlooker stooped over to look at the predator’s teeth with some unease. The top treble was firmly seated in the jaw, but easily released and I held the fish aloft for him to inspect further before slipping it into the weigh sling. The needle stopped at 21lb 2oz, a pristine fish in fine fettle, and it was quickly photographed before being returned to the net to rest. 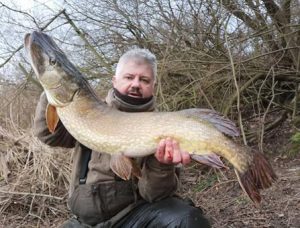 I was pleased it had been witnessed, it’s always nice to surprise someone (especially a non-angler) with a big fish, and as the pike regained strength, we spent a few minutes in pleasant discussion about what else may lie within the waters. He told me that seeing the pike had made him want to start fishing again, after a hiatus of over twenty years, so you never know, it may just bring him back to the brotherhood! I encouraged him to lift the net and gently release the pike back into the margins, and as we both watched it swim away, we were both feeling pleased by what we’d shared. On a tough water, I’d had my second good fish of the season from the clear depths, so I happily wheeled the barrow back to the van. I know there are even bigger fish to catch, so I’ll definitely be back soon…I’ve got my eye on some real monsters!