I’ve had the pleasure of some company on my latest trip, and as I usually fish alone, preferring the peace and solitude, it made a welcome change! I was contacted a few weeks ago by Bethan Sedgewick-Miles, an angler who had last deadbaited for pike around ten years ago and wondered if I would mind her accompanying me to see how I approach my sessions. Bethan is a regular angler, with frequent light lure sessions under her belt on a variety of local venues but was interested in returning to a more static method which would hopefully produce a bigger fish; with a personal best pike of almost twenty pounds, Bethan had handled decent pike in the past, but asked for a refresher to brush up her confidence. It’s a wise decision to ask, as I see many pike on the receiving end of poor treatment from poor anglers, so we arranged a visit to a local water on the Fenton and District Angling Club card to see what happened…

The water is a tricky one to find, with the nearest postcode actually being the car park of Stoke City Football club, (which let’s face it, isn’t somewhere you’re likely to win many trophies) so after a few more directions, we met at the bankside and had a quick look at the water. I’d chosen the pool as it was fairly small, with some sizeable known fish residing within, and also because I was reasonably confident of at least one bite for Bethan. I’d chosen not to fish, instead preferring to sit back, watch and advise as requested, so we picked our spot and got started. I wanted to emphasise my consideration for fish care, so before any baits went in, we discussed the use of a soft walled cradle to prevent any fish sliding off, which was added to by unzipping another mat and placing it inside. I use the zip mat when travelling light, but when time and barrow permit, I enhance the protection by using both together.

Next, we talked about tools, and I was delighted to see that Bethan was well prepared. As a former nurse, the sheer variety of forceps, pliers and cutters available in her tidy tool roll was incredible, and we talked about each in turn. In truth, Bethan had so many options that open heart surgery could have been achieved on the bank, but I’d rather see that than just a single pair of (easily misplaced) forceps; you can never have too many unhooking tools, and they are vitally important! With our fish care sorted, we moved on to simple leger rigs, and Bethan listened attentively as I constructed a very easy rig comprising just a running lead, safety bead and semi-barbed snap tackle before showing her how to mount the bait, passing the top treble firmly through the root of the tail and explaining how it helped to keep the bait on during the cast. We also touched on just how a pike picks up the bait before turning it to swallow it head first, therefore giving the reason why the trebles are placed as far back from the head of the bait as possible. It was all simple enough stuff, but if you aren’t sure, it’s good to reconfirm…

With both rods rigged similarly, a roach on one, a smelt on the other, we tightened everything up to wait for an indication. Bethan had loaded her reels with braid, so it was pinched into the indicators whilst we considered the requirement for instant notification when a pike picks up the bait. Bethan was eager to exchange ideas, which made demonstrating my methods a pleasure! As we waited, we both talked about family, work, past jobs and much more as the conversation flowed over a brew and I realised that fishing alone sometimes renders me a little blinkered in how I see other anglers… maybe I should get out more! An hour into our session, without any action, we moved the baits to different spots and Bethan set the indicators whilst I opened the rig bin to talk about pop up rigs, poly balls, balsa inserts and more. 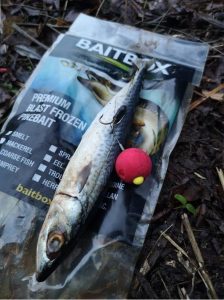 Once again, Bethan absorbed everything like a sponge, and explained that she had tried to construct her own traces by both crimp and twizzle stick but wasn’t happy with the results. I’m not keen on crimps either, believing that however good they are they still have both the potential to fail, or produce an unnecessary sharp edge, and we quickly worked out just why Bethan’s traces had failed, and soon remedied the issue; another problem solved. Whilst waiting for a bite, I put together a float leger rig, discussing several different types of float and showed Bethan just how incredibly sensitive a properly tensioned float set up can be. Twitching the line just a few millimetres produced movement of the float, and it gave Beth another ‘tool in the box’ for future pike sessions. After a brief description of the pop up rig, she now had three easy options for her next session. Bethan had spent some considerable time watching a variety of YouTube videos prior to our meet, and I think it fair to suggest that it had caused confusion, with all manner of complex paternosters, booms, uptraces, sunken floats and other rigs adding to the sheer overwhelming amount of information available to her, and what Bethan needed was not so much instruction, just a little clarification! It can be confusing for new pike anglers to learn what is needed and when, but as I explained, I compare it to me with a pie; if I can see it, and I’m hungry, I’ll eat it, so its just a case of putting the bait where the pike can see it, and hope that it is peckish; same thing and very simple!

After a few hours of moving baits to different areas of the lake, Bethan was injecting her roach bait with oil prior to recasting when a single sharp bleep alerted me to some interest in a sardine bait dropped into open water. Bethan hadn’t heard it as she was concentrating so hard, so after a second indication, I prompted her to look at the rod tip, check whether the drop off had fallen away, and as a result, lift into the bite which was now obvious. Solid resistance saw Bethan attached to an angry fish, played well, but after a few minutes it was netted first time and lifted to the waiting cradle. My ‘student’ wanted to unhook the pike herself, so I showed how to slip her fingers beneath the gill plate, slide them forward to the point of the jaw, and open the predator’s mouth to remove the hooks. It was a decent fish, and feisty, but within seconds, Beth had the hooks out and clear of the fish, so it was time to weigh her prize. The sling was wetted, the scales zeroed, and I guessed at 16lb; Bethan wasn’t so sure, so I was exceptionally smug when the needle settled on 15lb 14oz! 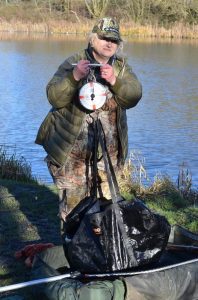 After the requisite trophy picture, the pike was well rested in the net as we chatted about how long to wait before releasing it. I suggested that the pike would indicate when it was ready, so we knelt and admired the mottled camouflage, the powerhouse rear end of the ambush hunter, and noted the sensory pits on its head before the pike began to splash around ready to return to the watery depths. Dropping the edge of the net, Bethan allowed the fish to swim away, and turned to me with a huge smile on her face and gave me a huge hug! I was pleased to be able to prove that simple tactics worked, and also pleased that she caught a pristine fish during our session together… but I don’t think I was as pleased as she was!

Overall, I have to admit that I enjoyed sharing my ideas with Bethan and listening to hers; it was a very pleasant way to spend the day, we enjoyed a smashing fish together, and I’ve learned plenty from it too. Angling isn’t always about catching fish, sometimes it can be just as much fun to bounce ideas off someone else and share a great capture with them. Although I didn’t fish, I enjoyed Bethan’s pike as much as any of my own, so maybe we’ll do it again sometime. I’ve already been asked if I’ll consider taking another angler pike fishing, and after my day with Bethan, I don’t think I’ll turn it down! If you are an experienced pike angler, then I would recommend taking someone who may ask for guidance; you might be surprised just how satisfying it can be, and you’ll certainly be helping them to gain confidence, improve their knowledge, and most importantly, look after the pike properly… Thanks Bethan! 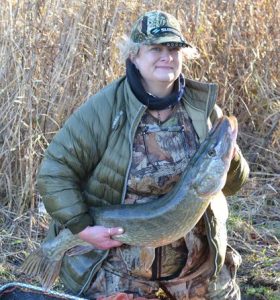