If, like me, you spend a lot of your winter fishing time in search of pike then you may have considered boosting your deadbaits to try and get more bites. There are several ways that you can do this, from making your hookbaits more attractive, to attracting more pike into your favoured swim over weeks or months. Many of these tactics can make a significant difference to your catches, but it is important to know how to get the most from them. Get it right, and you can find some red-hot pike action in the weeks ahead.

The olfactory (smell and taste) organs work in just the same was in pike as they do in other coarse fish, so there is no reason to think that these senses are any less important for food location, yet we rarely think about how to boost the attraction that we are putting into the water when piking. This could be a real ‘edge’ that is being missed. Boosting the attraction of your baits, or increasing the scent trail could really make a difference to catches.

The additives that you can use to boost your deadbaits attraction are endless, but I tend to concentrate on fish-based additives and oils, which mimic the scent of the bait. If you are using oil-based additives then make sure that they have been ‘winterised’ so that they stay as liquids in cold water. On the bank the simplest way of boosting a bait is to very carefully inject some oil just under the skin. This will seep out slowly, giving hours of attraction. 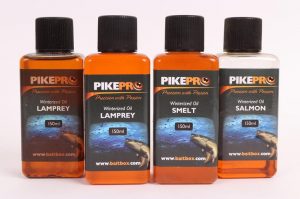 Frozen baits can also be boosted very effectively at home. I do this by carefully injecting a small amount of fish oil into the sealed bait bags; ensuring that the oil coats the baits inside. When the baits are taken out of the freezer and start to defrost they will soak up the oil into their skin, giving a very thorough coating with maximum dispersion.

The simplest way of boosting the attraction of your deadbaits is to maximise the amount of the baits own smell that can escape. The simplest way of doing this is to carefully stab some holes into the bait, especially just behind the gills where most of the blood can be found. Alternatively, try using half baits, or fillets which let the scent flood out. Although a lot of anglers shy away from using them, the head end of most baits will contain more blood, and hence more attraction, than the tail. 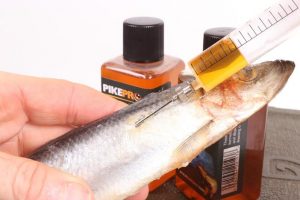 I know of several very successful, but rather secretive pikers who swear by groundbaiting when they are deadbait fishing. This could be in the form of introducing chopped fish using a Spomb around their hookbaits, or firing out balls of groundbait laced with all manner of fish-based attractants.

Having tried this tactic quite extensively, often comparing the results from one rod which has been groundbaited accurately, next to one that has not, the results show that groundbaiting really is worth trying out as it does bring more runs. This is especially the case if you are planning on fishing the same swim all day, as the added attraction seems to attract pike over time. If I am moving swims, or repositioning my baits regularly then I have found no advantage in groundbaiting. 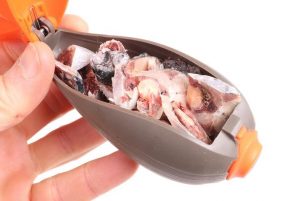 A lot of anglers talk about pre-baiting with deadbaits for pike, but in my experience very few actually do it effectively. One key thing that you must remember is that pike may only feed infrequently in winter, so introducing too much bait can be the kiss of death, filling them up for days and making them virtually uncatchable. If you are going to pre-bait then baiting up more often with a small amount of bait is much more effective than filling it in once a week. This, of course, means that you are going to be limited to venues close to home, which might render the whole idea a non-starter.

Try introducing just a dozen chunks of bait into your preferred area three times a week to begin with. Ideally, this should be a swim that you already know holds pike and one that is not going to be fished by other anglers.

You can bait up with any cheap baits that you can get your hands on, although it often pays to use the same baits on the hook as the pike can become quite choosy. I tend to keep any used baits at the end of a session and use these as pre-bait, introducing the bait as I am about to depart. Never introduce baits used on one venue to another, as this could lead to the spread of disease.