There is no doubt that deadbaiting is the number one method used to catch pike in the UK. Look at the reports of gigantic fish caught from venues such as Chew Valley Lake and the same baits keep tripping up these fish time and time again. Whilst we tend to think of pike as the ultimate freshwater hunters, studies have shown that a good proportion of their diet is actually scavenged dead fish picked up normally off the bottom.

Deadbaits are also easy to buy, either from your local tackle shop or fishmongers, but the more I have fished for pike the more fussy I have become over the baits that I use. Not only should they be as fresh as possible, but they also need to be the right size. Smaller is often better in this case, simply because it is easy for even a big pike to pick up a 6-inch bait than one twice this size. Smaller baits are easier to use and lead to a lot less dropped runs. So, if I can only get hold of big baits, I will normally halve them to give me a more manageable size.

HOOKING BAITS
Positioning the hooks in your deadbait is important to ensure that the bait is presented correctly and to give clean hooking with minimal risk of deep-hooking. The standard trace, with its twin treble hooks, is ideal for deadbaiting, with the uppermost hook normally positioned in the tough muscle at the base of the tail. The second hook should be around a third of the way down the bait with one or two of the points in the flank of the bait.

For float fishing the hook position can be altered to give a more realistic presentation. Most coarse fish rest with their heads down at about a 45-degree angle.. To mimic this place the top hook just in front of the dorsal and the lower hook in the base of the pectoral fin. Finally, for sink and draw tactics, or for paternostering on a river reverse the hooking with the top hook through the lips of the bait and the lower hook in the flank.

Normally I add some buoyancy to the bait in the form of a Bait Flipper fixed between the hooks. By trimming this down the bait will sink ever-so-slowly and always land with the hooks sitting uppermost where they will not catch on the bottom. This is a very simple tip, but one that makes it much easier for the pike to inhale the baits and will lead to more fish in the net.

Keep deadbaits in sealed packets in the freezer. Once the packets are opened the baits will start to dehydrate and eventually suffer from freezer burn. Whilst I have no evidence that this makes them less effective, they look much better if stored correctly.

Whilst not the most complicated baits on the planet, it is worth thinking about how and where to use each deadbait. All will catch fish, but on most venues one or two will always outshine the rest. Try a variety of baits and see how you get on. Here is my guide to the baits I use and why. 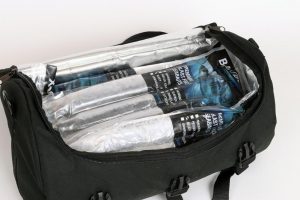 Some deadbaits take dyes and flavours much better than others. Smelt are perfect for colouring and can be simply sprayed with liquid dye to change their appearance. Try yellow, red or green baits. Injecting fish oil is the most common way of flavouring deadbaits. Flavouring is a useful way of revitalising a washed-out bait, extending its useful life. Try smelt or mackerel flavours.

BEST DEADBAITS AND WHEN TO USE THEM

SMELT – My ‘go-to’ bait on most waters, I will normally have one rod fishing with this bait. These small estuarine fish have a unique white colour and cucumber-like smell that sets them apart from anything else. Exactly why pike like them so much is a mystery, but I think the white colour stands out very well on the bottom and the size of even a very large smelt is perfect for a pike bait. Smelt are also quite tough baits and will often withstand several casts. They can be dyed easily and take a flavour well.

HERRING – I like the small herrings, referred to as ‘jacks’, measuring about 8-inches in length. This is the ideal size to use as a whole bait. If you can only obtain larger herrings then try chopping them in half. A very oily bait, herring work well on most venues, their flat profile means that they work well over light weed and silt. Cheap to buy and quite tough.

SARDINES – Much softer than herrings, but a similar shape and smell. Very effective on some venues, where they out-fish even smelts. On others though they will be munch by chub, crayfish and even bream, making them less useful. Best used whole and cast out frozen because of their soft flesh. Expect to get just one cast from each bait.

ROACH – A tough bait that in many venues will make up the bulk of the pike’s diet. Try to buy roach that are in good condition with the scales and fins intact. A dense bait, and quite tough too, roach will last several casts and are ideal for wobbling or twitching back. Make sure they sink by puncturing the swim bladder and squeezing the air out.

POLLAN – A deepwater white fish found in Scandinavian lakes, this strange fish is very much hit and miss on many waters. I like to use them on rivers, where their natural buoyancy makes them ideal for popping-up and they will gently sway in the current. A tough bait and one that casts well.

MACKEREL – An absolute staple of the pike anglers bait box, mackerel have caught me a lot of fish over the year, including my personal best. Getting hold of the right size and the freshest baits can be difficult in winter, especially when windy weather has kept the fishing boats land-locked, so stock up when you find some good baits. I like mackerel that are about 8-inches in length. Any larger than this and I use them as half baits. A very oily fish that works well on most venues.

LAMPREY – These prehistoric fish have a very chequered track-record in my book. On some venues they can be deadly, but on others draw a blank. I tend they find to work best on rivers that get a lamprey run each year, but have also caught using them on gravel pits. A very touch bait that oozes loads of attraction, they are ideal for long-range fishing, thanks to their shape.

TROUT – Several varieties of trout are often available. I find browns particularly effective, being nice and tough and quite buoyant. Ideal for sink and draw fishing, as well as using under a float. The golden variety is much brighter and is worth searching out as a good change-bait.

LAUNCE – Also known as giant sandeels, these long thin fish don’t appear at first sight to be a good pike bait, but believe me, on their day, they are up there with the best of them. Ideal for long-range fishing thanks to their shape. Pike can find them a little tricky to pick up off the bottom, leading to poor hook-holds, so I always take the head off to make a smaller bait and critically-balance them with a Bait Flipper.