I’m still rambling on about single hook pike rigs again this week, but in truth, I’ve been surprised by just how much interest there has been since I started my investigations. I’ve tried the single hook rig on a few different waters now, and most of the time, it’s been a success and on the one water it wasn’t, I think I’ve cracked the code there too. Onwards and upwards…

This week, I visited a club water under the ownership of Stoke-on-Trent Angling Society. Astbury Mere contains some hefty specimens, with carp, bream and catfish to very substantial sizes, but the pike fishing, according to some, is relatively unexplored. I noted a trio of recent captures on social media, the best at 22lb, so resolved to try my one hook tactics on a more challenging water. I arrived bright and early and quickly headed off to peg 5, which I thought would give me access to fairly deep water as I’ve fished the adjacent swim before and found good depth. How wrong could you be? 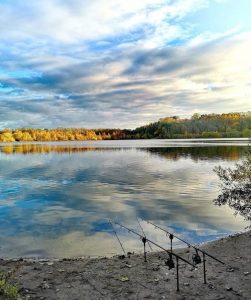 If you are a regular reader of my writings, you’ll know I’m also backed by Deeper sonar, and regularly use one to get an idea of what I’m faced with, especially on new waters. Typically, I’d forgotten my Deeper, and after tackling up and casting, I quickly realised that it was a real error! In an area I’d presumed I’d be counting down my lead for a good number of seconds, I found that it plunged into weed before I could tighten up. Had I had my Deeper, I would have had a couple of casts to ascertain exactly what I was fishing over…and moved! As it was, I was, it was now raining heavily, and I really didn’t fancy shifting, so opted to make the best of it, and hope for a bit of luck.

I wasn’t happy. I know that Astbury is renowned as a tricky venue with depths of over fifty feet, thick weed, and crystal clear waters, so it can present a real challenge, and I’d already put myself at a disadvantage by picking the wrong swim. Retrieving the first cast, I found the lead and bait thick with glutinous, cloying silkweed; the pike would never find my bottom bait amongst that slimy mess, so it would have to be popped up to be seen. Fortunately, the day before, I’d purchased a ‘deadbait kebab kit’ so had a quick look at the package insert to decide how to proceed. The images showed the plastic stick to be mounted on one of the three points of a single treble, so I slipped it over the point of my single circle hook, added the bait flag to stop it slipping off, and put it back out. It settled, and I tackled up the other rod with a similar rig…

On the first rod, a Baitbox roach had been chopped up and added to the hook, on the other, a smelt. I’d used a baitdropper to put a small amount of chopped fish around the hook baits, utilising the oily sprat to try and produce an attractive slick, and then sat back to give the baits an hour before checking them. A silent hour passed, and when I bought the rods in, it was instantly apparent that the baits were still in the weed; how high did it go? The rigs were broken down, and a leger stem incorporated into both before I tried again. I swapped one of the kebab kits for a hair rigged roach and added a foam ball to pop it up over the weed. Hopefully, this time, both would be clear of the mess below and the pike would be able to see the target.

The first run came soon after. A screech of the alarm, the drop off snatched up, and line flew off the spool; a monster from the deep? No, it was pest from the air. A seagull had spotted the baits in the clear water, picked one up and tried to stay aloft, before fortunately dropping the bait and wheeling away. It focussed the mind though, and the rig was changed again to try and combat not only the weed, but now, aerial attack as well! This time, a roach had braid stitched through it, and it was tied to a rig ring on the back of the hook. I’d added the ring by threading braid through the hook eye and whipping it in place, before covering with the treble sleeve to tidy up. Once the bait was in place, it was dropped out about fifteen yards at the beginning of the marginal shelf, and the line gently tightened to ensure I didn’t drag back into weed again!

Time for a cup of tea. I watched the rod tips as I enjoyed a warming brew and was surprised to see the kebab rigged rod tip twitch gently a couple of times. At the alarm, nothing, but there was certainly something going on… I put down my mug and crouched by my rod. The drop off twitched up, then sank back… then again, an inch at a time, and the tip nodded again. Single bleeps emitted from the alarm in time with the nodding tip, and the indicator rose and fell in unison. I pinched the line, but could feel nothing, so lifted the rod and wound down to see if a pike had picked up the bait and lay still with it. Nothing. The bait ‘unplugged’ from the weed and a quick investigation revealed no teeth marks. The amount of floating weed on the line suggested that it was no more than suspended detritus which had caused the alert, but at least my bite indication was sensitive enough to pick it up!

The kebab rig was rebaited and cast back out, and I also checked the second rod, tweaking the line to ensure the alarm was on. I sat back down to try and finish my tea and watched as the drop off indicator on the close in rod hit the floor. I got up to wind the spool up and reset it, then returned to my drink. It did it again. The drop off hit the floor, so I tightened the line with my fingers. I could feel nothing, so was sure that a fish had swum through and caused the movement, I picked up the rod and wound in; solid! I couldn’t believe that I was weeded up again, so bounced the rod tip in dismay. Suddenly, a large pike erupted vertically from the water, no more than a couple of yards from the bank, and pleasingly, I could see my roach hanging out of its mouth… a drop back bite at point blank range! It wasn’t happy, and for the next couple of minutes fought hard to shed the single hook wedged firmly in its mouth. Eventually, I slipped it into the net, and from there my cradle, and was delighted to note that the debarbed circle hook had already fallen out as soon as the pressure was off; it doesn’t get much easier to unhook than that and I quickly moved my rod out of the way so I could support the fish for a photograph.

My prize was in superb condition, and didn’t particularly want to be photographed, but eventually calmed enough for a couple of quick snaps. I weighed it carefully at 19lb 4oz, not the first ‘twenty’ of the season I’d hoped for, but nevertheless, I was pleased to add another quality fish to the ‘single hook’ tally. My evidence now points to one hook being the way to go this season. Yes, I miss a few bites, but I’ve completely removed the worry about either deep hooking fish, or getting tangled up in flying trebles, and I’m hoping that based on my findings, I can encourage new (and established) pike anglers to give the single hook a go. I’ve met so many anglers who would like to fish for pike, but fear unhooking them when using trebles, so maybe if you are reading this, you might like to try a single, and begin to enjoy catching one of the most fearsome fish that swim in the UK!