At last! It’s pike season again! Hurrah! I can’t tell you how much I’ve been looking forward to sitting on the bank waiting for the line to ping from the clip, and slowly spool off the reel as a toothy adversary picks up my deadbait, and luckily, I’m off to a good start already! This season however, I’ve been determined to try out a new tactic, which I’m hoping will prove successful, just so I can share it with you.

My first pike session of the year was planned on a Staffordshire reservoir, a Stoke-on-Trent Angling Society water, and I’d spent the previous day spraying lubricant on long nosed pliers, sidecutters and forceps, making up traces, selecting my rods, and generally getting ready for what promised to be a cold, wet day on the bank. Sleepless with anticipation, I rolled up as the gates opened, and pulled in behind an angler I’ve met before, Stuart, who was busy unloading his tackle. We chatted briefly, selected our pegs, and headed off happily to prepare for the day as the sky darkened, and the first few spots of drizzle fell…

First up, the umbrella, with all the kit and my chair quickly wedged beneath it. Once that was done, then the second task was to prepare the unhooking kit, mat, and camera tripod. I see many anglers keen to get the bait out first, and then get caught out when a patrolling pike snatches the bait almost instantly. Get squared away first, then think about getting a bait in… it’s better for you, and safer for the fish! I’m still surprised by the number of anglers who have never caught pike, and if asked, the top tip I’ll give is ‘be prepared’. If you are properly organised, pike fishing is so much easier, and unhooking safely should be your first priority. Get that bit right, and your angling is much more enjoyable.

I chosen to fish at the deeper end of the reservoir, adjacent to a floating jetty, where I believed a few fish may have been located as a result of a huge influx of cold rain lowering the water temperature considerably. I know deeper water takes longer to cool, so assumed that any prey fish would still be keen to take advantage of slightly warmer water. I’d noticed a few roach dimpling the surface before the wind rippled the lake, so I was hopeful that pike would be nearby. Once I’d got everything ready, I was ready to cast out the baits; I’d opted for a small roach on one rod, and on the other, one of my favourite pike baits, the humble smelt. The roach was plopped in off the end of the jetties, the smelt launched out into around fourteen feet of open water. Both were left to settle, the lines sunk, and then popped into my drop off indicators. It was now a waiting game…

It’s been my usual practice over the years to use semi-barbed trebles for my trace making, but this year, I’ve opted for a different approach. I’ve seen many inexperienced pike anglers struggle to release trebles, resulting in panic, pain and often damage to the fish, and although I rarely have any issues, (I strike early!) I wondered whether a single hook would work just as well. After a trip to Australia, during which I’d picked up some reasonably priced circle hooks, I affixed them singly to the end of some Pikepro 35lb wire, sleeved the twizzled attachments, and slipped another sleeve over the swivel at the other end; quick, simple, and hopefully effective. The roach was mounted on the circle hook passed through the tail, and the smelt sat on trebles; time to compare! 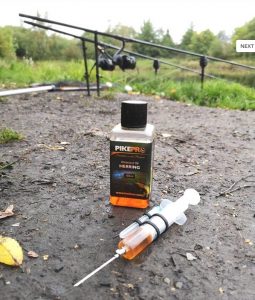 An hour passed, and Stuart whistled to attract my attention. He was landing his first fish, taken on a floatfished deadbait; my alarms however, remained silent. I moved my baits, swapping positions, and returned to my cup of tea. Another hour, another whistle, Stuart landed his second fish, and had also lost another, whilst my drop offs remained motionless. I swapped the baits for a second time, refreshing them with an injection of oils, and huddled beneath the brolly. Five minutes later, a bleep alerted me, and I watched the drop off indicator twitch up slowly; the roach was attracting interest! It was a tentative bite, so I got up and removed the line from the clip, and held it between my fingers to see if I could feel a fish…

I noted a slight pressure, but nothing more, and decided to strike; I’d rather miss the fish than risk a deeply hooked pike, and as I swept the rod aloft, I knew I’d missed my first take of the year! Stuart laughed… Ahh! The single hook had failed to find purchase, but looking at my bait, it was almost unmarked, so I wasn’t confident that the fish had actually got the roach in its mouth. A fresh tempter went on the hook, and it quickly went back out to the same spot. I was hoping the pike was still around! A few minutes later, and another bleep caught my attention; the same rod, the roach bait again… This time the indicator jerked up towards the rod blank and fell away, and line continued to unwind from my reel. I slapped the bail arm over, lifted the rod, and felt resistance; yes!

I’d hit the fish at a fair range, and it stayed deep until it came closer. As it broke the surface, it ‘tail-walked’ and I realised that if the hook was going to come out, it was at that point. I’d crushed the barb to make it easier to remove, but if it could withstand that much pressure, as the fish flew through the air, then I was confident it wouldn’t dislodge! A couple of minutes later, and my first pike of the year was safely netted, the single hook easily visible in the scissors of the jaw, and it was quickly carried to the mat. As I peeled back the folds of the net, it was instantly apparent that the single hook had held well, the wide gape providing stability and purchase, and with the crushed barb, it was extremely easy to remove. Result! I took a moment to admire the fish which just scraped into double figures, and then slipped it back to swim away strongly. Single hook one, trebles nil.

Having recast both baits, I waited patiently as the rain drummed on the umbrella and drank yet more tea. Stuart had seen no more action, and as we sat silently, the weather got worse, with drizzle swirling under the shelter and the temperature dropping; it wasn’t pleasant as conditions deteriorated! Fifteen minutes after the first fish, an extremely fast take ripped the line from the indicator, and the alarm squealed as line passed over it. I wasn’t missing this one, and gleefully whistled Stuart to let him know! Once more the single hook had wedged in the pike’s jaws, and this time, a slightly bigger fish slipped angrily over the net. Single hook two, trebles nil. 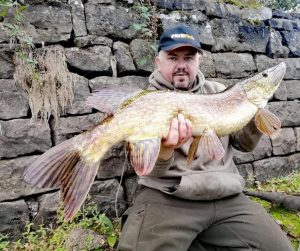 Another fine pike in pristine condition was quickly freed of the hook, and I did weigh this one at a shade over 13lb; not huge, but immaculate, and certainly worthy of a picture. That proved to be the last action of the day for either of us as the wind chill bit, and I eventually packed up and wandered over to a shivering Stuart to say goodbye before climbing into the van and heading for home. Had it proved that one hook was better than trebles? Certainly not, the difference could have been down to bait choice, but it did prove that a single hook trace will engage with pike, and it does make them easier to unhook. Will I stick with it? It’s definitely worth further investigation, and I’ve already had much interest on social media about the rig, so I’ll persevere and let you know!